Top unusual houses around the world

The 14 most unusual houses of the year

The article is a recompilation of the most unusual houses that are on the market this year. They are either for sale or for rent, or function as a Guest Residence. Some may considered them weird, scary, ugly or beautiful in a unique way. As they say, beauty is in the eye of the beholder. Even if they are unusual, their price tag is hi in some cases, so don’t let appearances fool you. Lets get started:

This Residence is actually a Hotel. Although it may seem as a wrecked airplane taken over by the tropical forest, hotel Costa Verde was constructed out of salvaged airplane pieces form the San Jose airport to resemble a crashed plane. The unique accomodation is set in the jungle of Manuel Antonio at the edge of the National Park in the Costa Verde Area II. To offer the plane great views of the ocean and to offer the visitors the sensation of actually flying over the topical forest, the hotel was assembled on a 50- foot pedestal. The vintage 1965 Boeing 727 hosts two bedrooms, tv area, a small kitchen, dining area, bath and a wing balcony with a wondrous view of the ocean and on the top of the planeâ€™s right wing you can find a wooden deck from which you can admire the wonders of the tropical forest surrounding you. This surreal holiday destination might seem a bit over the top and it really is, but if you enjoy some adventure and you appreciate wild experiences, this one of a kind airplane hotel is your perfect destination. 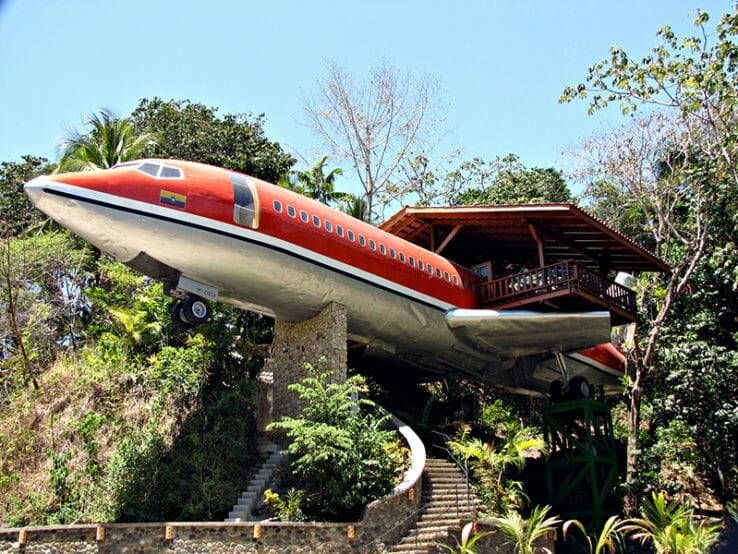 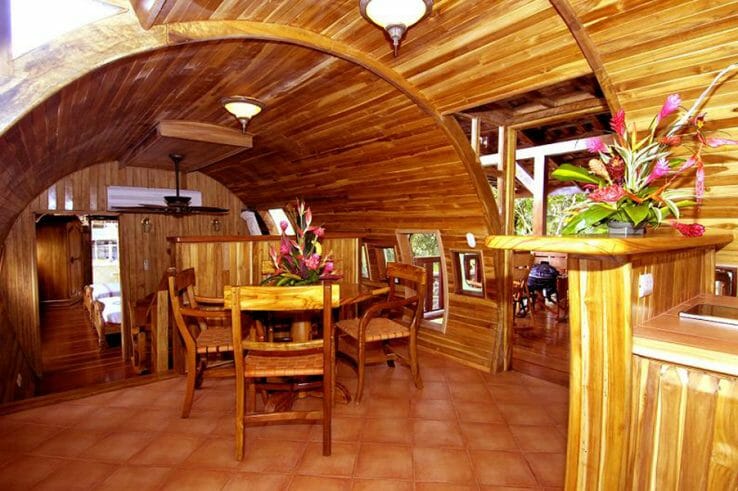 Thereâ€™re various ways to show your love for cars, for example, you can frequently have them cleaned and waxed, or adorn the cars with interesting stickers. But have you ever seen somebody build a house that strikingly resembles his car? Thatâ€™s just what architect Markus Voglreiter has done recently. Apart from the unique appearance, it is also a green building, using â€œa â€™3 literâ€™ energy-efficient heating and insulation technique that optimizes all current building technologies, drastically reducing energy consumption.â€ 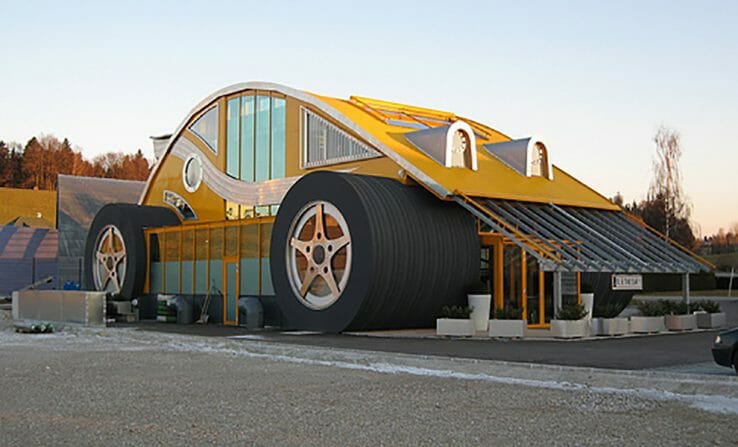 This awesomely unusual building was designed by Architect Szotnyscy Zaleski and built in 2004. While many not know, Zaleski was inspired by the unbelievable work of Polish artist Jan Marcin Szancer, a fantasy and childrenâ€™s literature illustrator when designing the building. 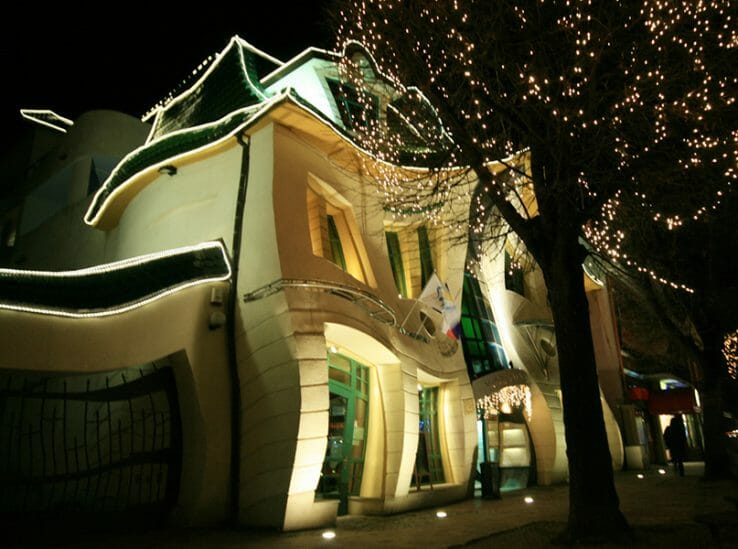 Constructed by Architects Golos and Mikuciuk, they said they didnt built the house for a reason, they just wanted to do something different. Similar houses with flipped designs have been built in the past in Poland and America, but this house not only features inverted exterior, but the interior rooms are also filled out and furnished in the same orientation. Visitors can tour the bedrooms, bathroom, kitchen and living room and see couches, beds, chairs, tables- complete with place settings, all firmly attached over their heads. And just to throw visitors off balance a little, the whole structure is tilted off axis by about 5. 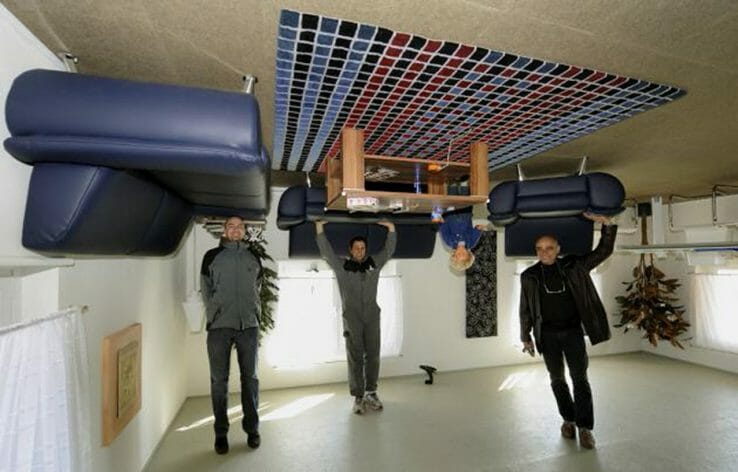 What looks like left-over boulders from the Stone Age is actually a house. Casa do Penedo or the ‘House of Stone’, was built in 1974 with four different boulders. The Portuguese getaway has no electricity so the homeowners use candlelight to see when indoors. That said, the house boasts a cozy fireplace, a swimming pool carved into stone and logs for stairs. 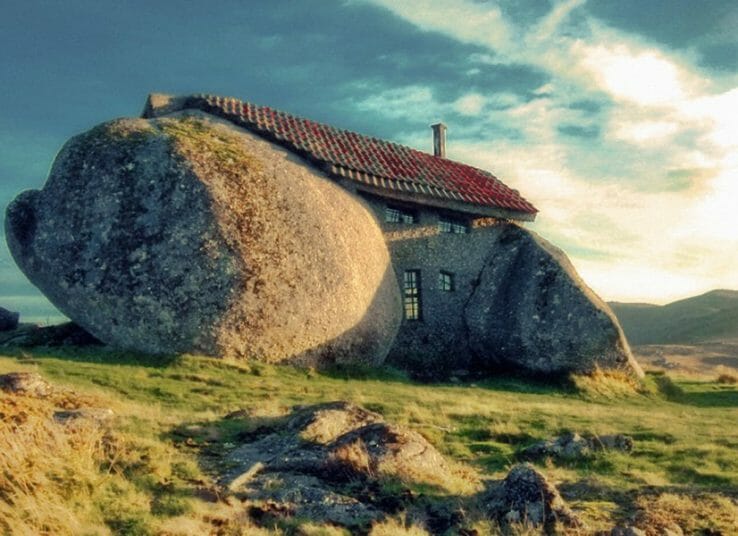 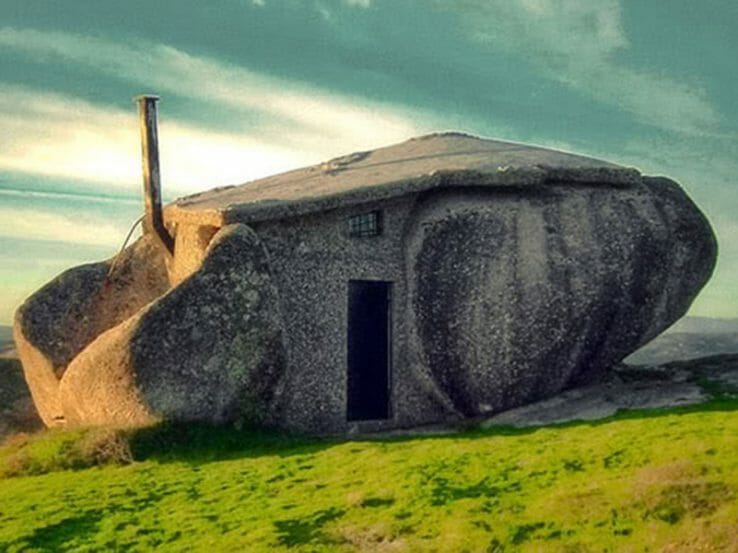 The late mayor of Suwon, South Korea, Sim Jae-Duck, built his loo-shaped, two-story home to mark the inaugural meeting of the World Toilet Association. Jae-Duckâ€”reportedly born in a restroomâ€”made it his life’s work to advocate for clean, efficient, and working sanitation for more than 2 billion people living without toilets worldwide. The 4,520-square-foot steel, concrete, and glass structure set “Mayor Toilet” back a cool $1.1 million. It features a showcase, glass-walled bathroom at it’s center. Those concerned with privacy can turn the walls opaque at the touch of a button. The home also features a roof-top balcony that’s accessible by a “toilet drain” staircase and equipped with rainwater harvesting technology. 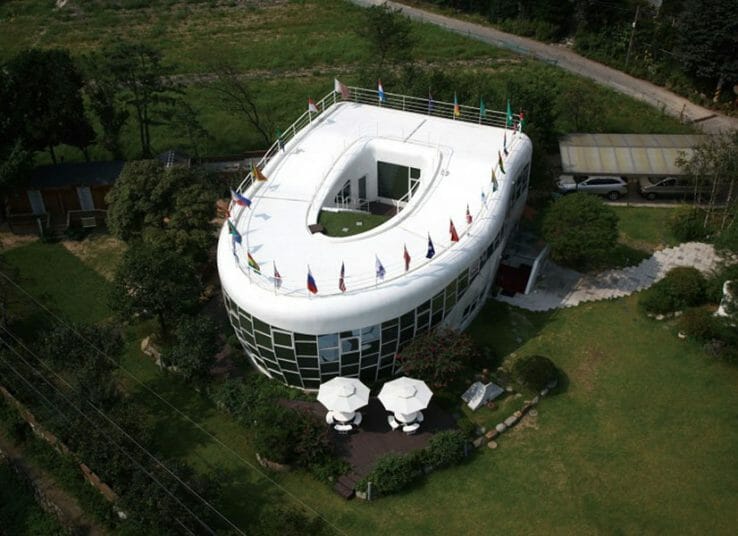 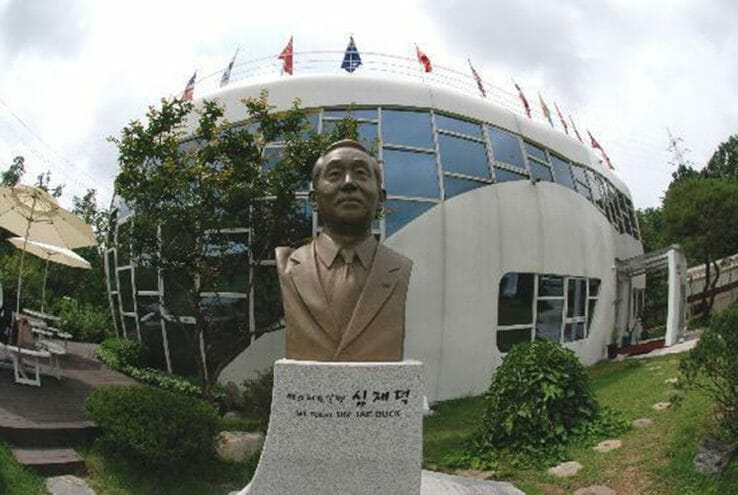 Located on the beautiful island of Isla Mujeres nothing speaks “romantic getaway” more than the “Conch House”. What’s more this stunning home with 180Â° panoramic views of the crystal clear deep blue caribbean sea is actually available to rent. Built using everything from a traditional concrete foundation to recycled materials the “Conch House” must surely be one of the most enchanting residences on the island of Isla Mujeres [off the coast of Cancun] if not in the world. 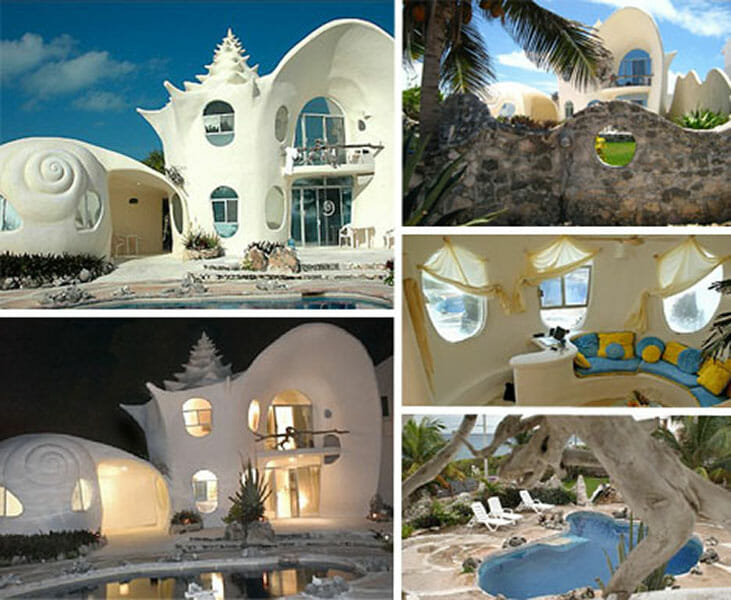 This is a custom home built on a 1.2 -acre lot in the Rochester suburb of Perinton.The final result was a home made up of five interconnected pods, situated on a hill at the tree line, which was designed to blend art and nature. Building five pods to sit on concrete and steel “stems” was no easy feat. The contractors had to erect the pods in two parts – a bottom to sit on the stems and a top. Both sections were made of concrete and polyurethane. 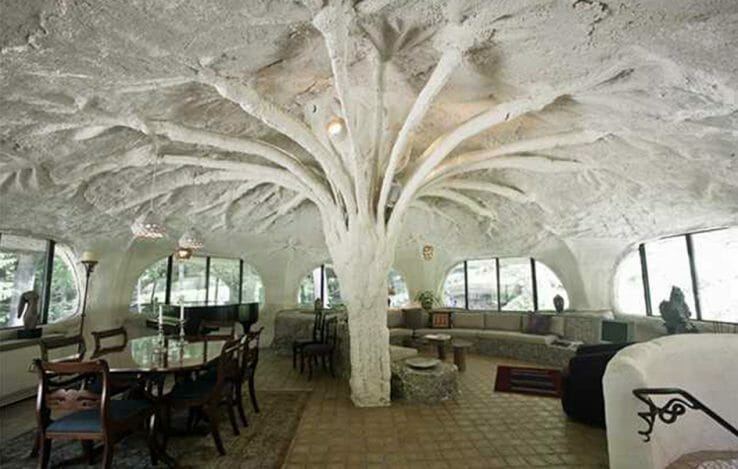 This was the outside-the-box solution that Dai Haifei, 24, had to soaring rents in Beijing. He built a mobile egg-shaped, solar-powered house that he lived in for two months on the sidewalk near his employer, an architectural design firm. He built this 6-foot-tall, solar-powered, egg-shaped house from bamboo, wood and grass seed. While he still needs to work out waste-disposal and heat-preservation issues, Dai told the China Daily that the home could easily be mass-produced. â€œThe seeds will grow in the natural environment, and itâ€™s cold-proof,â€ he says. 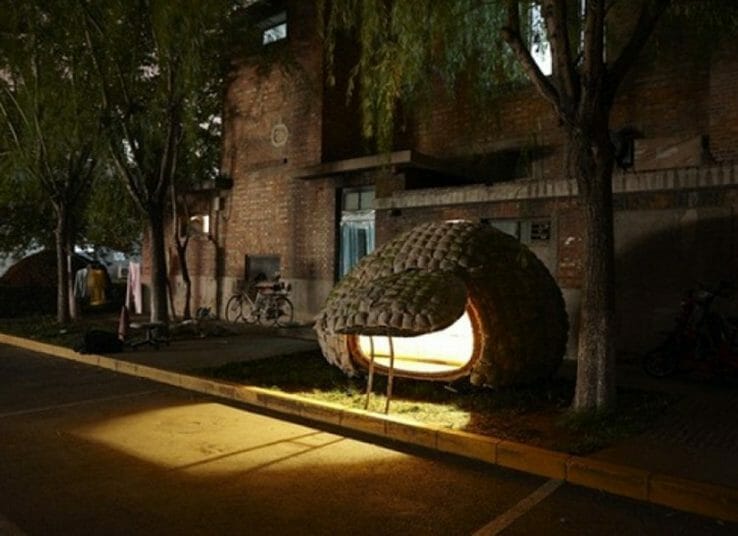 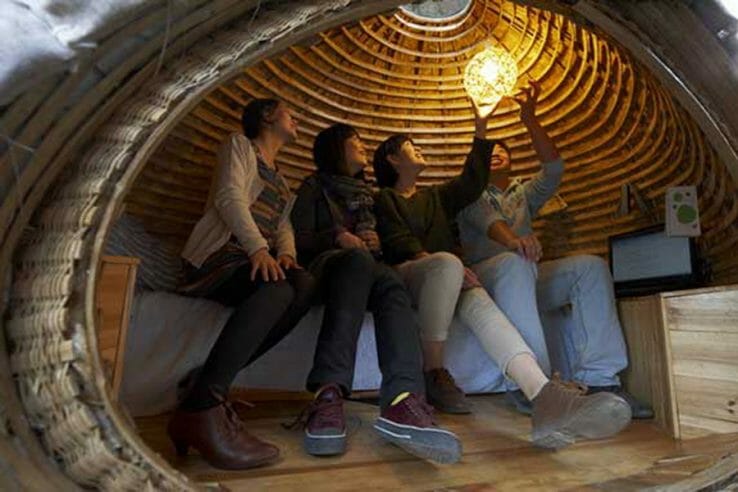 Hang Nga guesthouse, is a piece of artwork that really surpasses the limit of peopleâ€™s imagination. Designed by Vietnamese architect and impressionist Dang Viet Nga, this extraordinary building of non-rectilinear shapes has appeared in many international architectural journals and finally made its way to the list of the worldâ€™s ten most creative buildings. It resembles a tree with uneven windows, tunnel-shaped stairways, etc. Both the exterior and the interior of the guesthouse are created and decorated with twisting organic forms and very few right angles. The hollow â€œtreeâ€ extends in many directions, rising above to reach to the sky of the amazing Dalat. 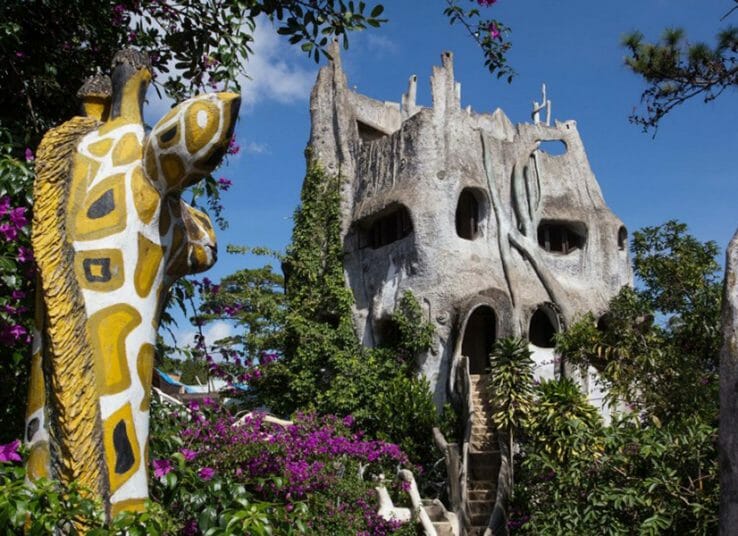 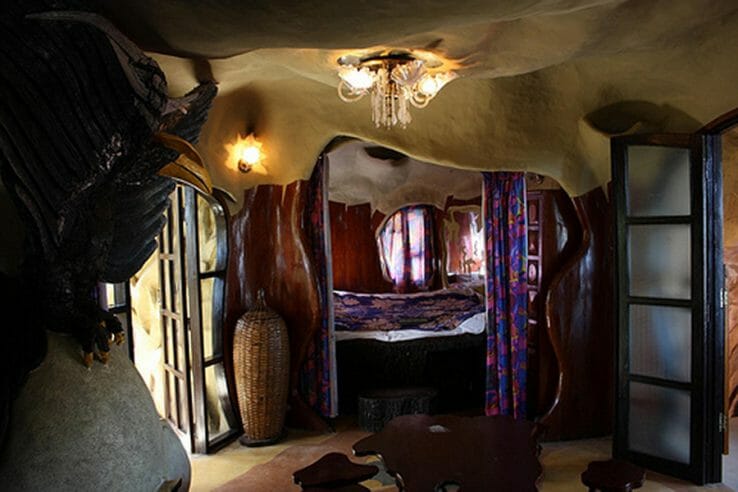 Lab House comes from Institute of Advanced Architecture of Catalonia (IAAC) and is a great example of eco-living. This Madrid-based project generates three times the energy it consumes and also houses an orchard in order to produce food. The shape of this house was dictated by its purpose: a sustainable, self-sufficient construction whose â€œform follows energyâ€. All the characteristics of its environment were carefully studied and taken advantage of, such as the wind or the solar rays. This house is currently available for sale, with prices starting from 45.000 â‚¬ for the smallest model. 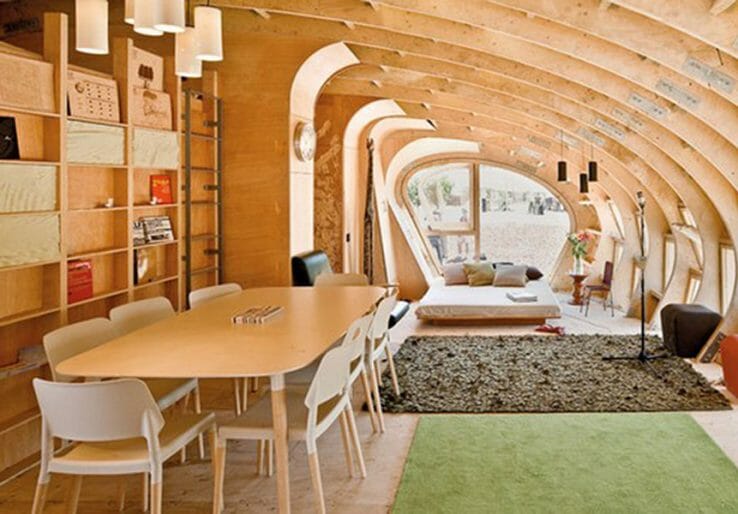 The 10 domes of the Sedona residence create a living space totaling 5,000 square feet. Each dome leads to another, starting with a grand entrance with 32-foot-high ceilings. Thereâ€™s a kitchen dome, a living room dome â€” which includes a large water feature and pool â€” as well as a theater dome that has incredible acoustics, Robertson says. Sitting on 3.5 acres, the house also includes a separate garage and additional parking for RVs. 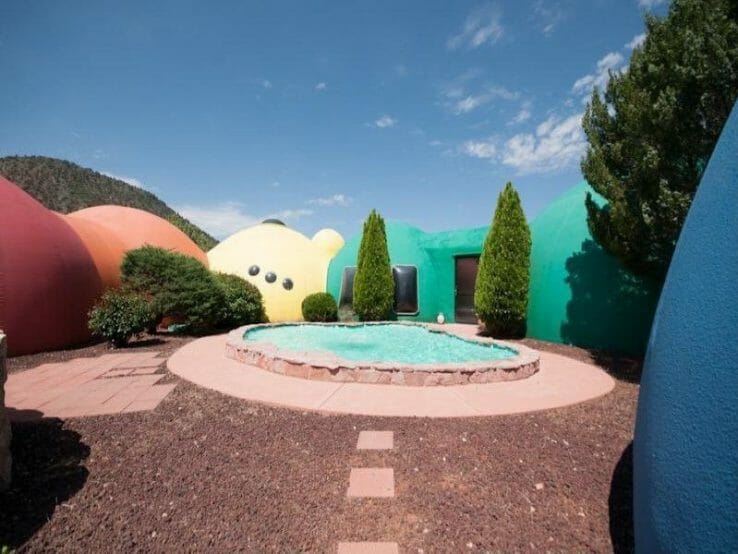 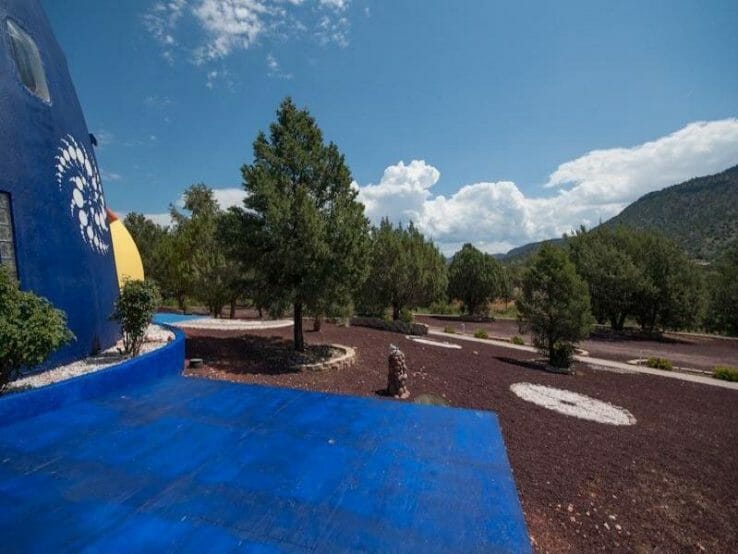 Built by Architect Octavio Mendoza, the exterior look of Casa Terracota is like a big mound of clay which â€˜somewhatâ€™ resembles a cottage if youâ€™re trying to find a shape over here. The house is furthermore surrounded by farmland and the whole place comes with the backdrop of the mountains. Once youâ€™re inside the rooms the walls blend into one another as if they were flowing and made out of a single mold. Although it is known as the house of Flintstone in the neighborhood, it still has a number of modern features for its residents. Youâ€™ll find toilets and sinks covered with mosaic tiles which come in an array of colors. Solar panels have been incorporated for hot water and two floors with sleeping area along with lounge are made available. Apart from these, the house comes with a fully functional kitchen that houses utensils made of clay. Beer mugs have been made from recycled glass while the lighting has been made available by employing scrap metal. 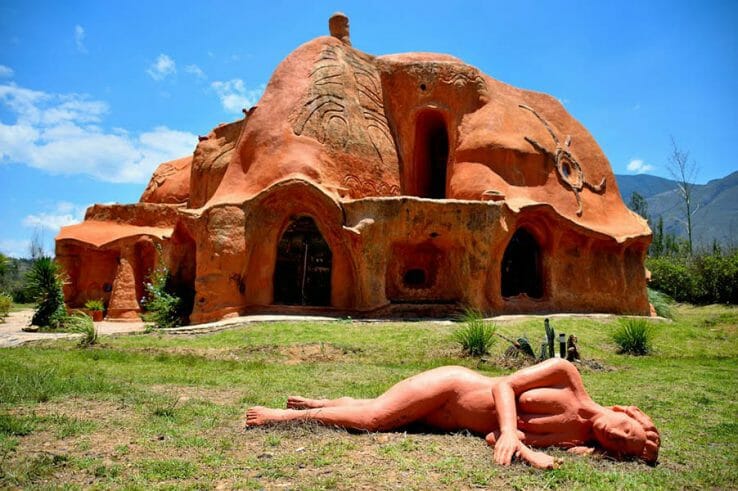 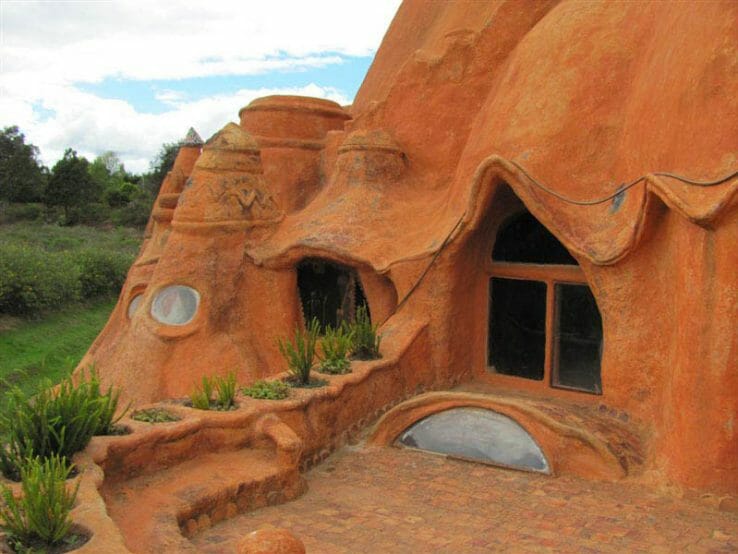 This home on an eastern cliff of Kehena on the big island of Hawaii features two ocean-view bedrooms plus a loft and sleeps five. From the inside, the boom box shapes are simply a series of windows. Home also features an outdoor shower. 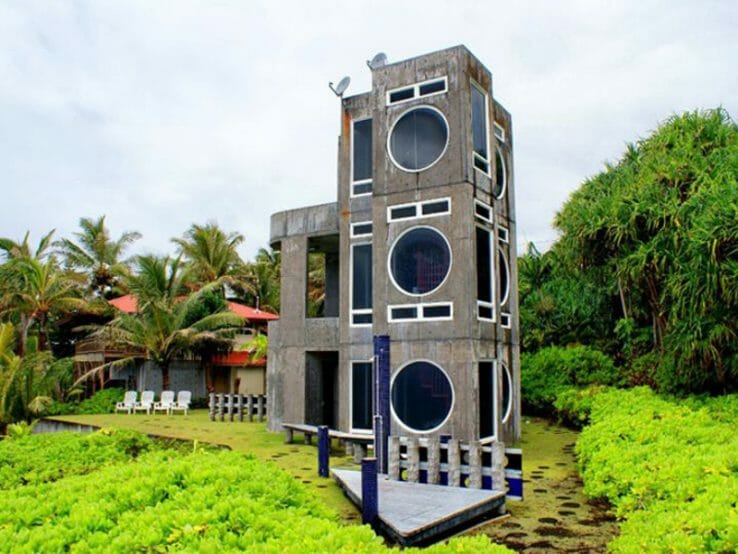